FinTech is currently one of the fastest growing sectors of technology. It is expected that by the year 2020, investment in FinTech companies will grow to 46 billon USD, while global investment in this sector today amounts to more than 26 billion USD (Statista). Because of their high degree of innovation, solutions originating in East-Central Europe, including Poland, are the subject of considerable interest in the branch and are represented at many international conferences. This year is no exception, and on 7-8 February at Finovate London, we will be able to see some new and interesting FinTech from Poland.

A modern banking system as a reward for lost years

East-Central Europe occupies an important place on the global map of innovative financial solutions; the estimated value of the sector is 2.2 billion Euro. The Polish FinTech market, considered a leader in terms of innovation in banking and e-payments, is estimated at 860 million Euro (Deloitte Report, FinTech in CEE, December 2016).

For years, the UK and Ireland have been the areas offering the most support for financial startups. Germany, the Netherlands, and of course the USA, are also high on this list. The common factor in these markets is an established banking system with long traditions, ones which often fail to match the Polish banking system in terms of development. This is in part due to the fact that the modern Polish banking industry, which had its beginnings as recently as the 1980s/1990s, started with the benefit of a higher level of technological advancement. For the point of view of the older markets, all Polish financial institutions and banks are in a way financial startups, a kind of journey into the future when compared with more established institutions. 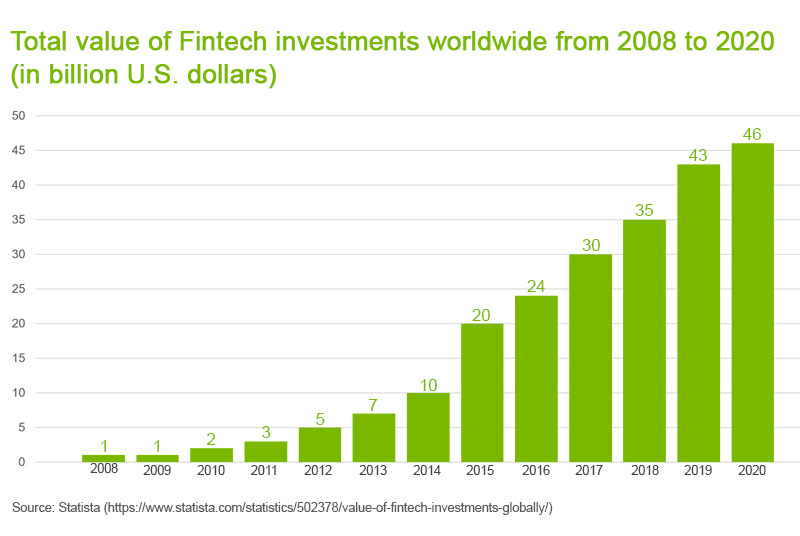 The status quo of Polish banking

“Some of the banks currently operating in our country began as startups, such as mBank or Alior Bank, and internet payments made via third parties which are not banks themselves, such as PayU, PayPal or Blue Media, are something completely normal for most users. An environment like this is highly conducive to new solutions,” says Jacek Ratajczak, Business Development Manager at intive, responsible for the FinTech market. “We are a market which is very open to the new – Poland was the second country in Europe and the sixth country in the world where Google launched its new AndroidPay mobile payment solution. And as far as adaptation to mobile banking goes, as many as 61% of smartphone users make use of phone apps to manage their finances. That’s the highest number in the European Union, where the average is 40%,” he adds.

“An example of what sets Poland apart on a global scale is Blik. Using this app, clients can transfer money to an account in another bank instantly and without charge, whereas in the USA this usually takes from three to five days,” says Artur Małek, Insight & Marketing Manager at Finanteq. “The disproportion can be seen with the example of payments. In Poland, more than 60% of users make contactless payments, while checks, which are the standard means of payment in many western countries, practically do not exist in Poland,” he adds.

Shortcomings in the system are an opportunity for FinTech companies

Polish FinTech companies see an opportunity to implement and scale their businesses to markets such as the UK or USA, where the daily needs of users often exceed the extent of services offered by their banks.

“The idea for Azimo de facto came from the difficulty in sending international money transfers at a reasonable price; fees for this kind of service in traditional banks or Western Union were as much as 10% of the amount sent,” says Marta Krupińska, General Manager & Co-Founder at Azimo. “After four rounds of financing from international investors, we are able to offer our services in 4 markets, sending funds to more than 190 countries. Unfortunately, not all financial startups which offer interesting solutions have enough determination and luck to enter the global market.”

“The FinTech companies operating in Poland are mainly banks. Their high level of technological development cools enthusiasm for the introduction of innovative solutions in this country. Of course, companies which operate independently from banks and which offer interesting and sometimes surprising solutions do arise, but I want to stress that they are few and far between. There is no comparison here with the situation in the USA or UK, where on average I hear of a new and interesting new development at least once a week. The main barrier here is undoubtedly the more limited prospects for financing that startups can expect. In Poland, we just don’t see the heavy millions that are invested in young companies abroad,” explains Artur Małek.

What can Polish FinTech companies offer foreign investors and partners?

“The main development trend in Polish FinTech is electronic payment and financial platforms, while data analysis, machine learning, and the development of sales channels are also making a strong showing. For the most part, native Polish FinTech companies are very willing to cooperate with the banking establishment, seeing benefits for both parties in such an arrangement,” says Dr Paweł Widawski, Chairman of the FinTech Poland Foundation.

“Foreign investors and business partners, especially those from the UK or USA, are aware of the high level of technical skill and rich human resources of highly esteemed specialists that we have here in Poland. Our creativity and pioneering projects work in our favour; however, the market is not entirely ready to accommodate the innovative solutions that we are prepared to supply,” explains Łukasz Dyląg, CEO & Founder of VoicePIN.com.

Has the market matured enough to accept futuristic solutions?

“At VoicePIN.com, we operate in many overseas markets, including Brazil, Chile, the USA, Africa, and now we are slowly rolling out in Asia. But the greatest barrier to the implementation of this kind of solution that we face is on the one hand low client awareness of voice biometrics, which is in fact one of the most difficult types of biometrics to create, and on the other hand negotiations and arrangements, which can often take years. Additionally, we face the challenge of convincing partners and clients of the security, reliability, and merit of this kind of solution. I expect that other startups offering exceptionally innovative and futuristic solutions which stretch the ability of the current market to adapt face similar challenges,” comments Łukasz Dyląg.

Polish solutions are a regular feature at Finovate

The success of Polish FinTech solutions in the international arena is demonstrated by the presence of Polish companies at a wide variety of conferences, as well as by awards won in international competitions.

Last year in London, solutions were presented which were based on biometric voice identification, used among others for identity confirmation and transaction approval. Moreover, the Valuto website, created by the Currency One company, won the Best of Show award at the 2016 edition of the event. This same award was presented to the company Finanteq at the New York edition of the event, where the company presented its Superwallet app, a virtual wallet which integrates various functionalities in mobile banking.

Another startup worth mentioning is Atsora, creators of the Momentum system, which qualified for inclusion in a small group of startups supported by the incubator program Fin Tech Innovation Lab London in 2015.

At the upcoming Finovate conference in London, one of the most important events in the finance industry calendar, we’ll have the opportunity to see companies from Poland, including BankUP, Efigence, and ING which will be presenting its My ING product, a product which intive took an active role in developing. Let’s hope that, just like in previous years, we’ll present innovative and worthwhile solutions.